Our first minutes in Vietnam were rather surprising: we didn’t expect the traffic to be so crazy, even though we knew that it’s not comparable to Europe in any way. Neither did we expect a communist city to look so western: numerous shops, billboards and neons everywhere. We took a taxi at the airport to get to our hotel in district one. The distance is relatively short, it shouldn’t cost more than 150,000 VND (~ 7 USD), we recommend Malinh taxi but don’t forget to tell the driver to turn the taximeter on. Going by taxi in Vietnam is like a safari trip: you sit relatively safe inside of the car and observe thousands of motorbikes and scooters going around you, which looks like riot. 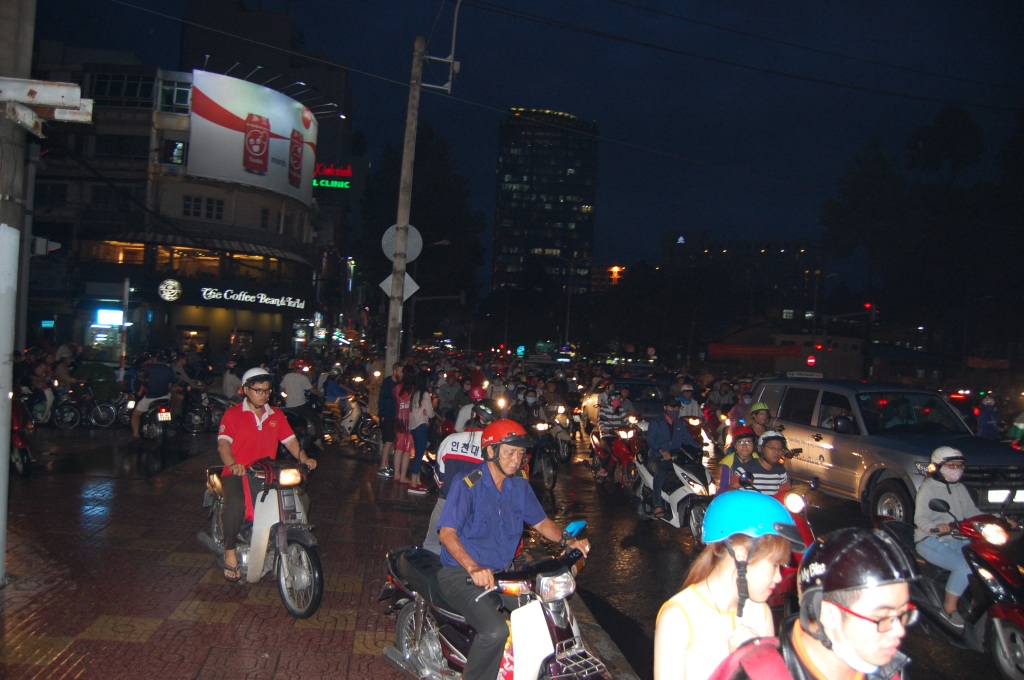 The concept of violating the right of way doesn’t exist: everyone just beeps the horn and hopes not to crash. Or at least it was the first impression we had. Frankly speaking, we saw probably just one accident throughout the whole three weeks we have spent in Vietnam, so when you get used to the vietnamese way of driving you realize that it is all working smoothly and fluently and prevents people from wasitng their time in jams. Nevertheless, crossing the street is a nightmare. Drivers pay totally no heed to pedestrians, they will go around you but they will never stop, so it is a rather shocking experience at the beginning.

We can definitely recommend the Bali B Hotel as a backpacker+ hotel: its clean, rather cheap, well located and the staff are very, very helpful. We were very willing to taste the famous vietnamese streetfood right after check-in and taking a shower. By the way, we found it surprising that in vietnamese hostels and hotels shower cabins are rather uncommon: you just take a shower in the middle of the bathroom and water splashes against everything. 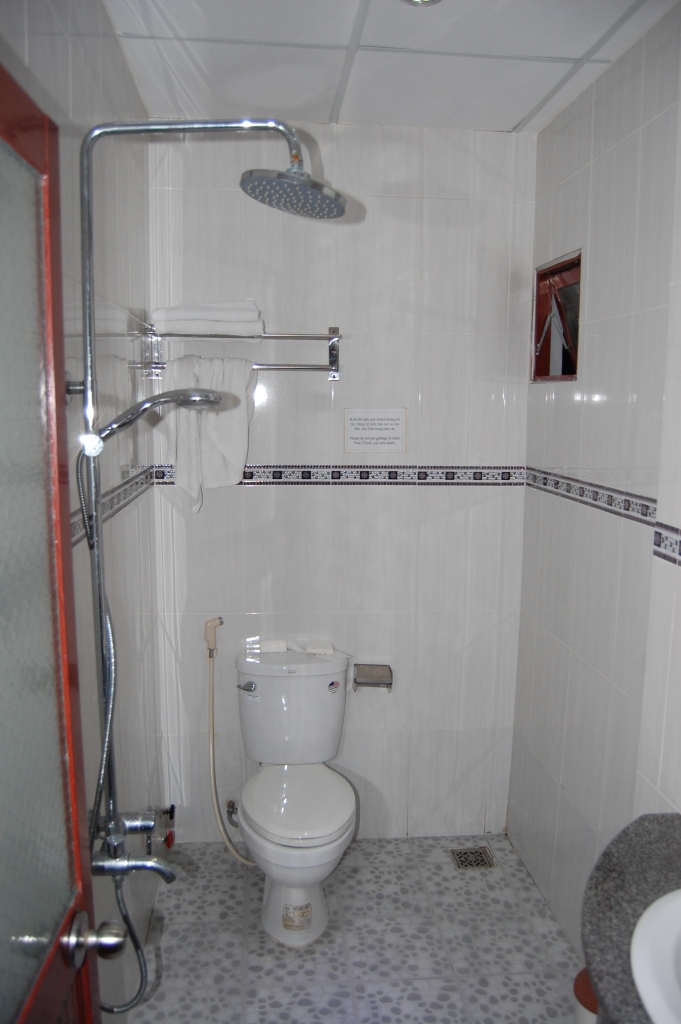 Anyway, we didn’t have to look for the food for a long time: virtually on the doorstep of the hotel a women was selling baguetes with some fish in tomato sauce, probably tuna, and loads of fresh coriander. We liked it mostly because it tasted so unusual and so fresh. Unfortunately because of the rain we didn’t find many other streetfood sellers of this kind. We entered a small restaurant and tasted the Saigon Green beer for the first time, acompanied by fried spring rolls. The beer was much to our liking, the spring rolls we found rather average, probably because there is a fantastic vietnamese restaurant in our city. We started the next day with a great Pho soup on the Ben Thanh market: we paid relatively a lot, 50,000 VND for one portion, but it was really good, even better than the new Saigon Export beer we discovered. The market on its own is a crazy place but we didn’t hang around more than five minutes, we left the shopping for our last day in Vietnam, as we came back to Ho Chi Minh three weeks later to take our flight back to Europe. We were mainly interested in coffee and cofee filters, as we fell in love with vietnamese style coffee with condensed milk, served in little glasses (photos in later posts). 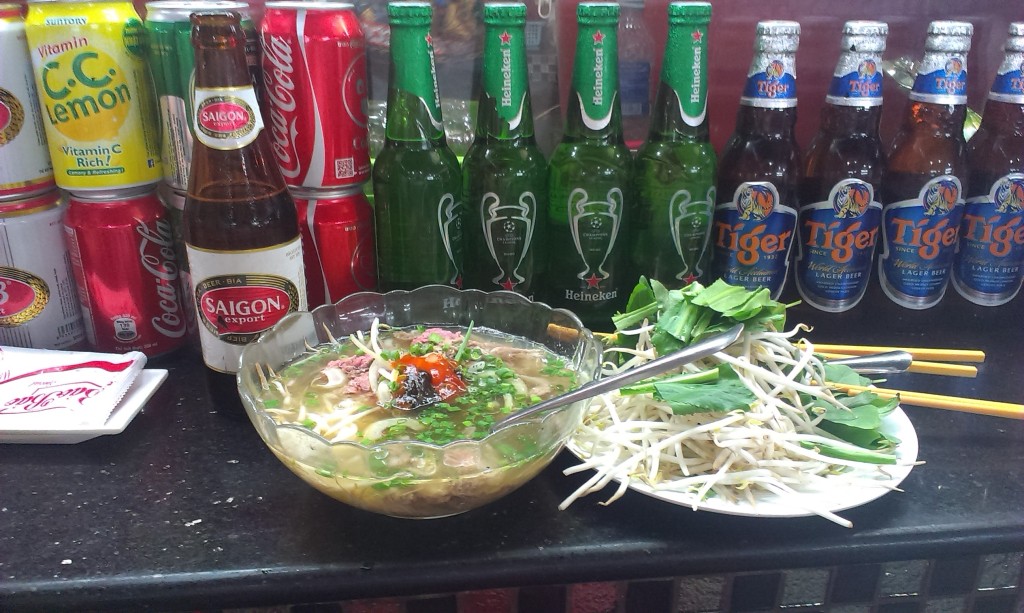 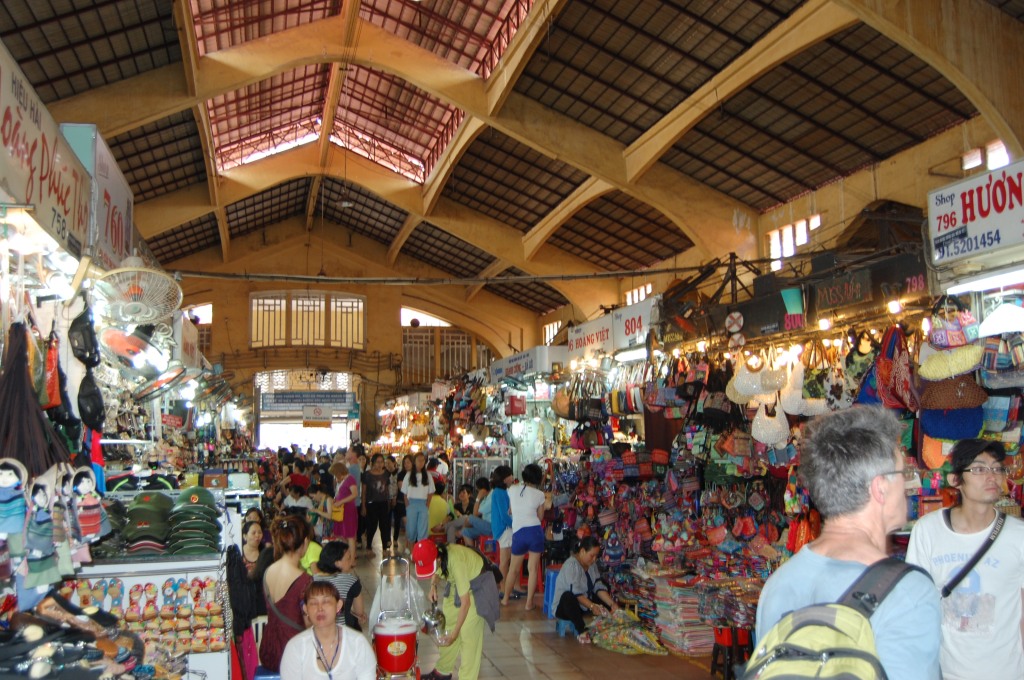 We had not planned our trip around Saigon in great details, we decided just to walk around and try to find some places recommended by our guidebook. We went to see the Independence Palace, but the awful soviet style facade discouraged us from visiting the inside. We decided to go and see the Saigon zoo, which was relatively close, practically within walking distance. We crossed the street and two motorbike taxi drivers reeled up to us, whether we wanted to go for a ride. We refused out of hand but after having walked twenty meters we came back and asked about the price to get the two of us to the zoo. Following a short bargaining we fixed the price at 40,000 VND per person. It was definitely worth it as even a short motorcycle taxi ride is a lot of fun, it is exiting to be on the funnier side of the traffic riot (not inside of a car). 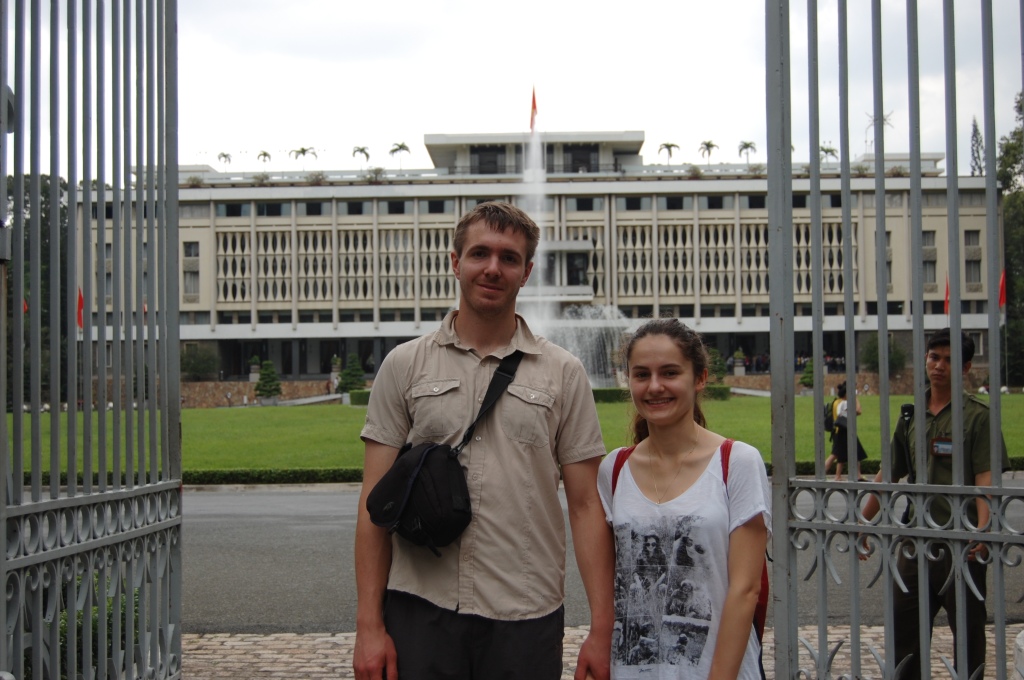 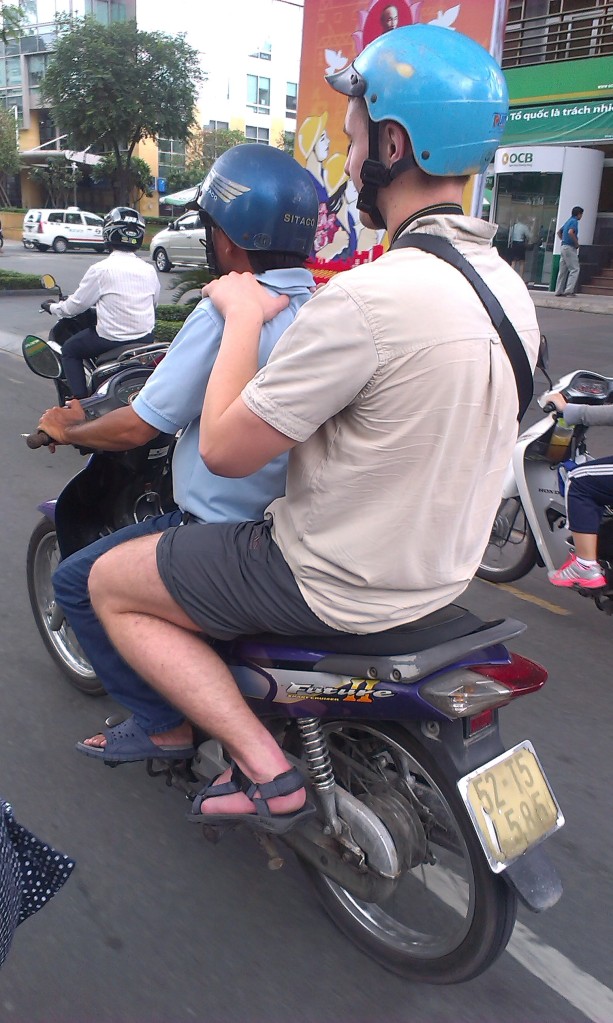 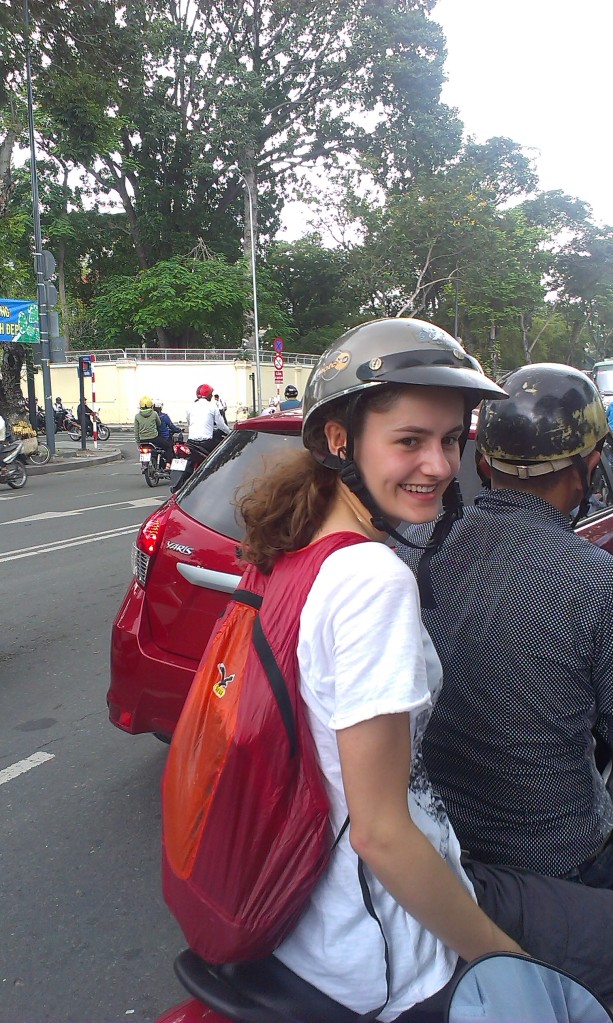 It took less than ten minutes to get to the zoo, our drivers insisted, that they would wait for us at the entrance to take us for a longer trip around the city. We agreed reluctantly as we suspected them to try to cheat us on money. The zoo was quite ordinary like those we had seen in Europe, though it was still much more fascinating than some war museums and communist monuments. And we really liked the Indian elephant. And the bear too. It started raining, but it stopped soon so it was rather a prelude to what came next. As soon as we left the zoo we almost bumped into our drivers, so the mistrust appeared to be mutual. 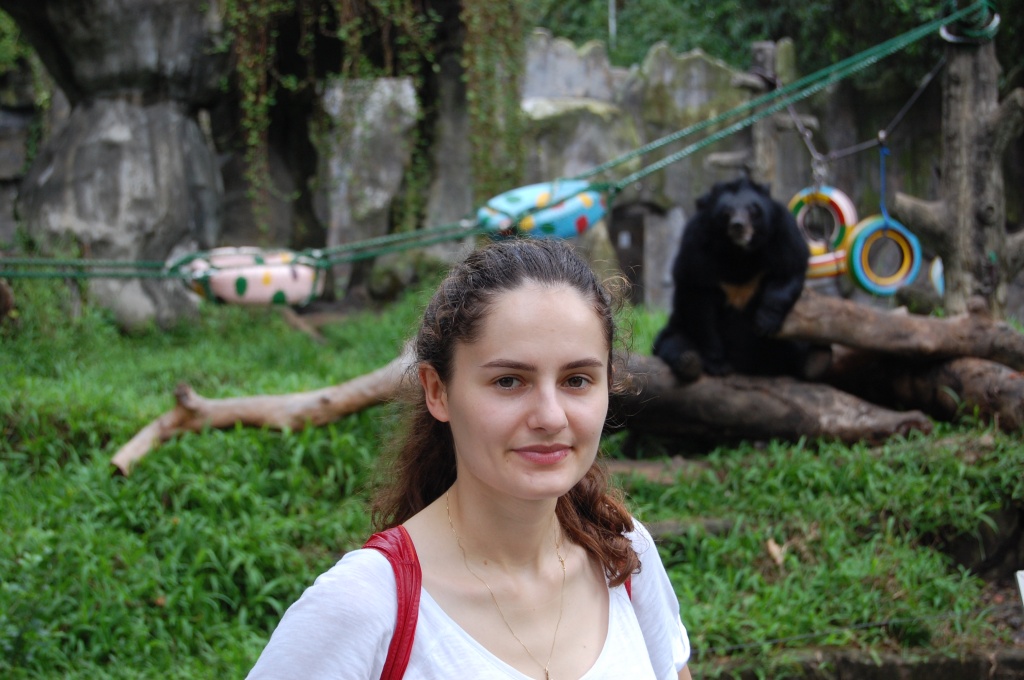 They wanted to take us to the war museum but we preferred seeing some pagodas and the china town. The first trip was very short, to the Jade Emperor Pagoda. Then it started raining, we had to stop as one of the drivers had to buy a rain poncho, while we had to put on ours. It rained so hard that I couldn’t see anything, since the motorcycle was going vey fast, so I just closed my eyes to avoid the raindrops. Apparently, the driver was more used to driving in downpour. We managed to escape the rain when we left the city centre and crossed the river. We took some photos on the bridge and then continued to the china town. There we have seen another pagoda, and agreed with the drivers that our final stop would be the Notre Dame cathedral so we ended up making a huge circle around the city. Actually, the best thing about this tour was riding a motorcycle while it was raining, we enjoyed it much more than the pagodas. It was funny, that there were occasional traffic jams in front of bridges, because people were just stopping underneath to avoid the rain, which blocked the street very quickly. The worst part was the paying, as the drivers were insolent enough to ask for 2,0000,000 VND  (~80 USD) for driving as around the city, which was totally disproportionate to what they wanted for taking us to the zoo, they multiplied the price times twenty five. In the end we paid the 480,000 VND, which was still too much when I think of it now, it was also totally disproportionate to what we paid for the taxi. It was fun, though. 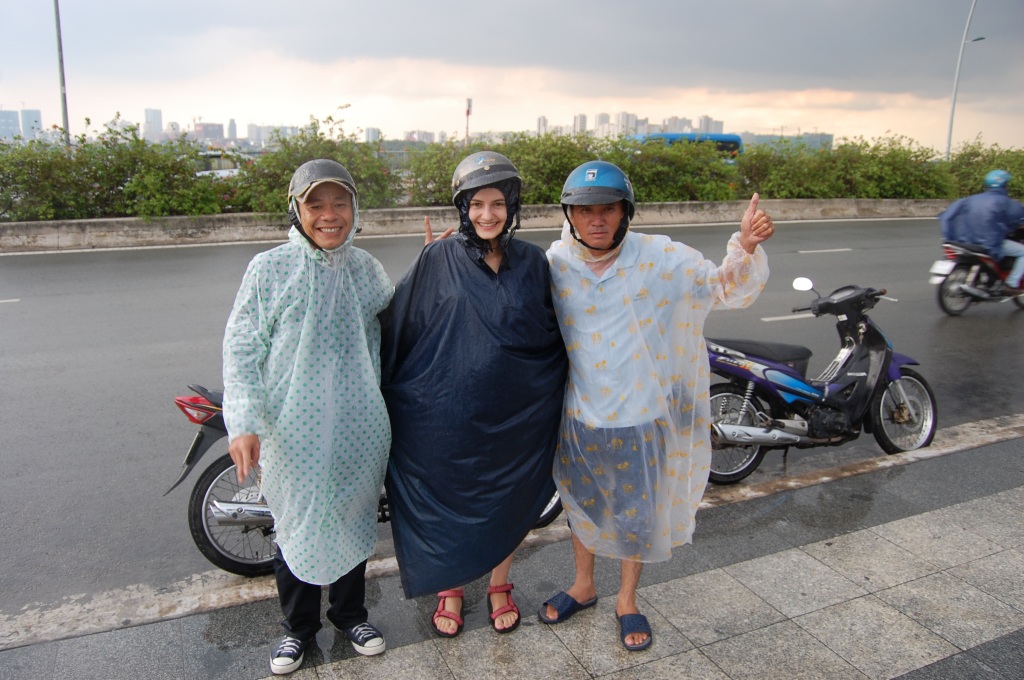 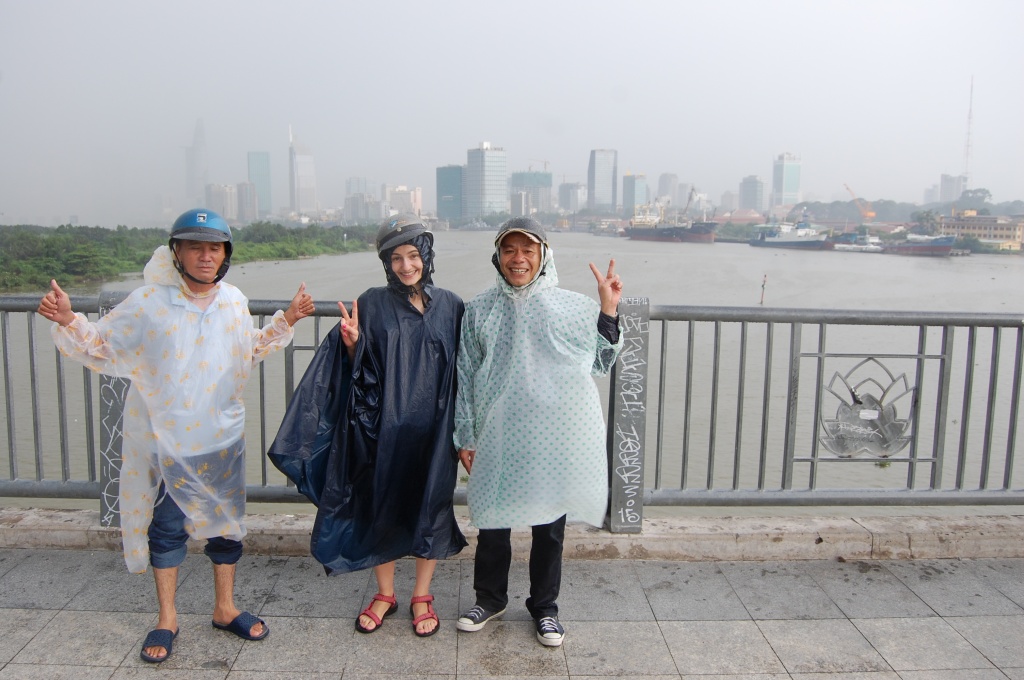 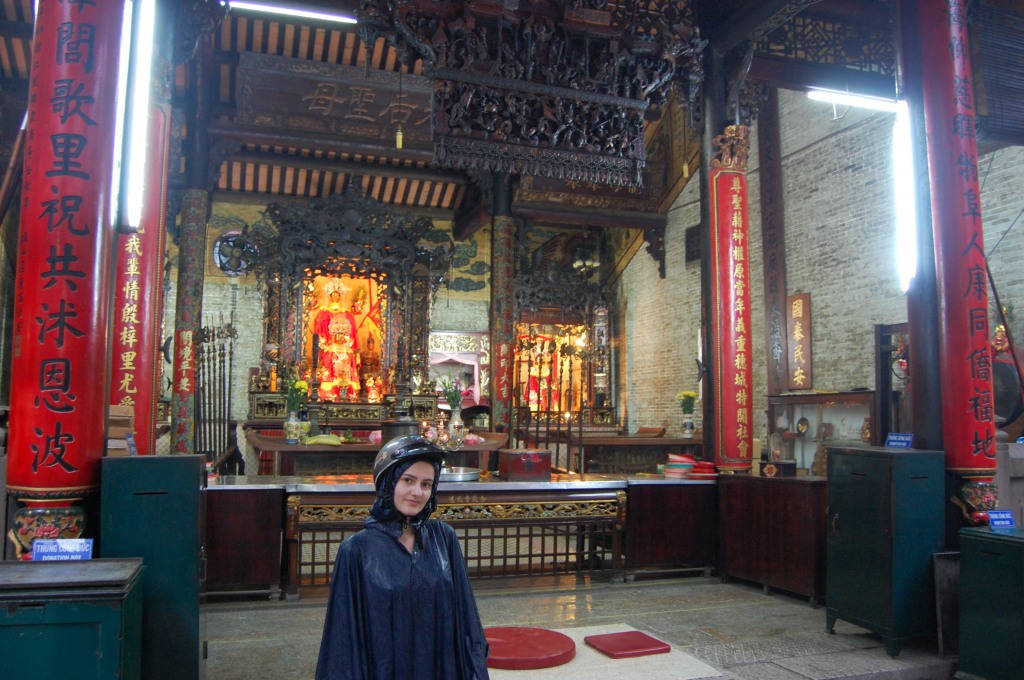 We entered the cathedral, it wasn’t very special neither from the inside nor from the outside, yet it was nice to see that it survived so many years of the communist plague.  Then we visited the hall of the Central Post Office, mainly just to get some cash from the ATM, but we also liked its architecture. It is a very good example of French colonial style. Afterwards we went for a walk back to the hotel but we wanted to pass by the opera house and the Continental hotel which have remarkable facades. We bought some coconuts to drink on our way, yet they were relatively expensive, 25,000 VND each and rather dry, we got many better later on. 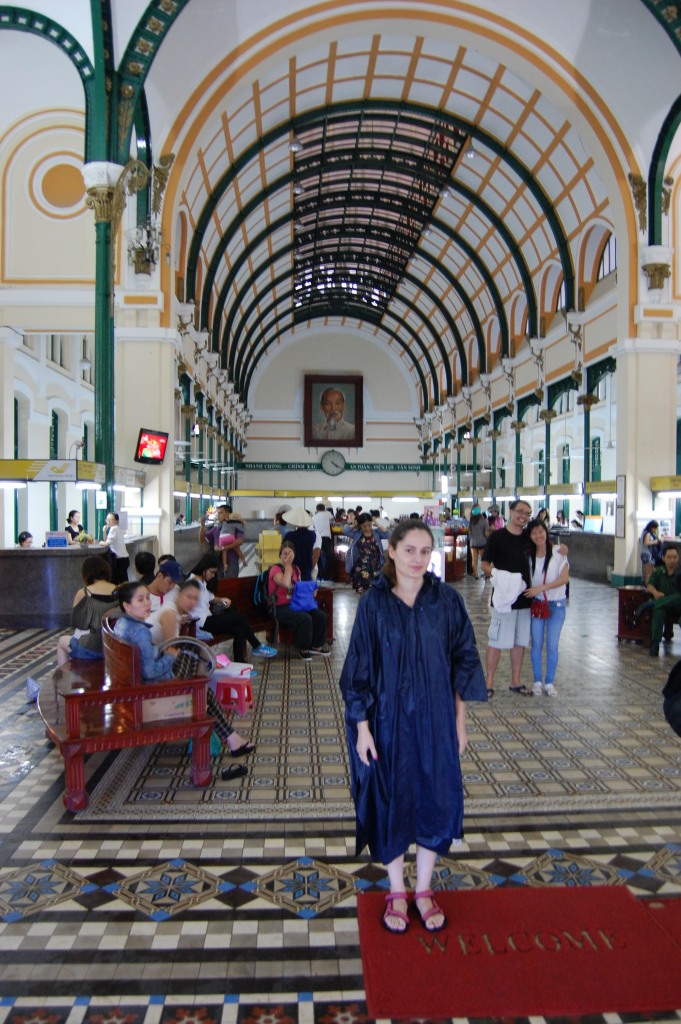 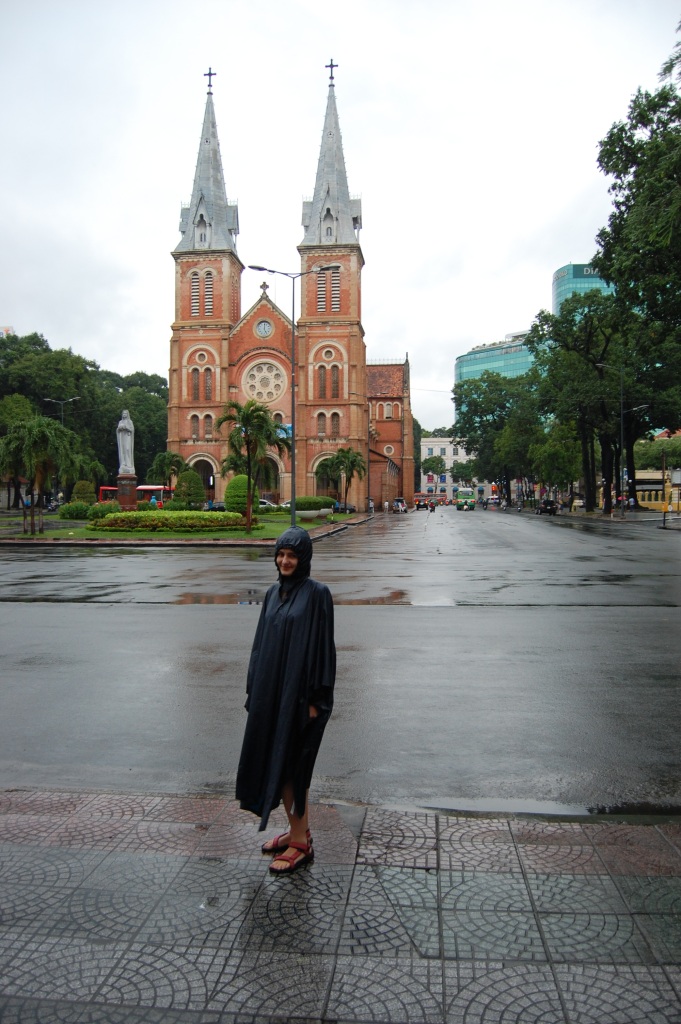 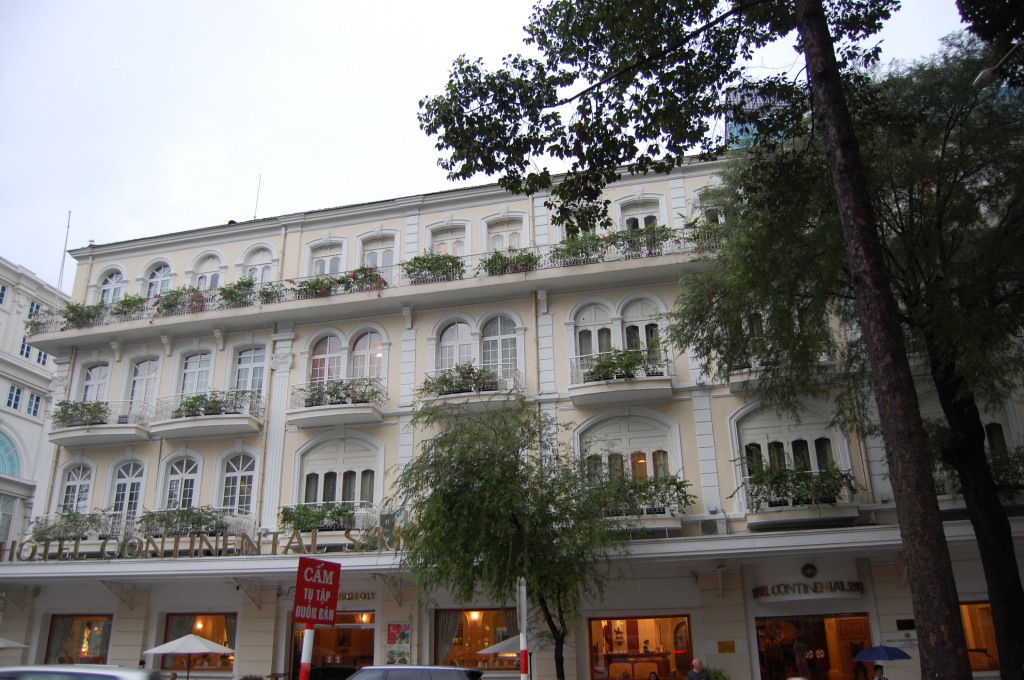 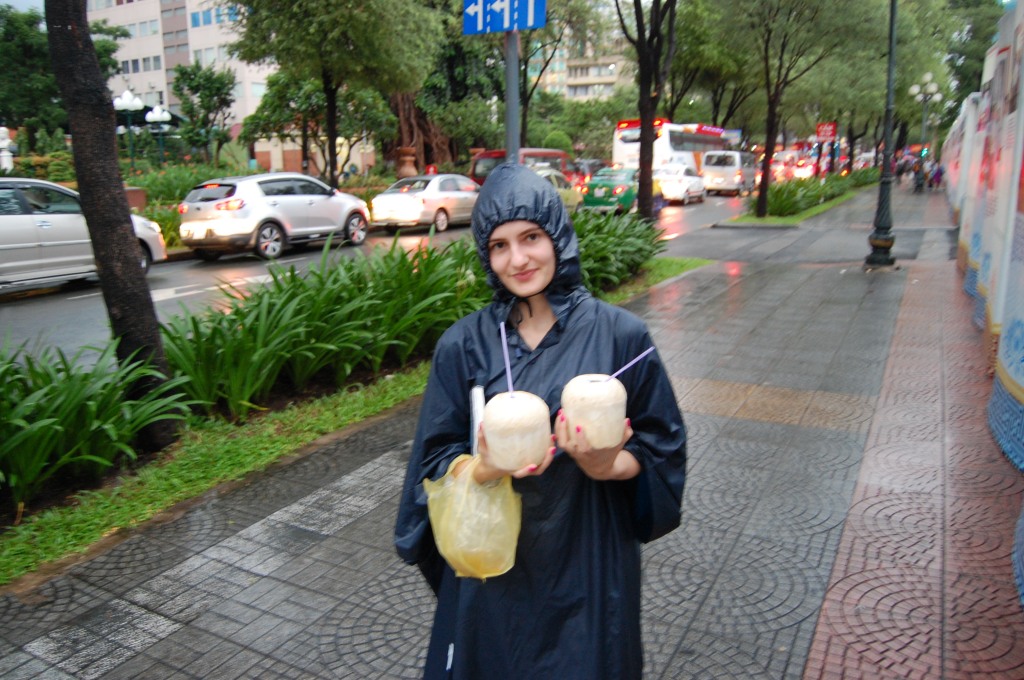 When we came back to the hotel we started planning our trip to the Mekong delta. Fortunately, at the reception we met a very helpful and communicative travel agent who offered us a very nice two day trip for 25 USD per person, which I will describe in later posts. We also bought an open date bus ticket to Hanoi which allowed us to visit Mui Ne, Dalat, Nha Thrang , Hoi An and Hue on our way, for just 50 USD per person. Not only did we save money on hostels, since we could sleep in the sleeping bus on longer distances, but it was a really good value for money, we would probably pay te same price just for one train ticket from place A to place B. We booked the trip for 8 AM the following day, we were back at 5 PM the day after that and we have also already booked the bus for 8 PM that day. 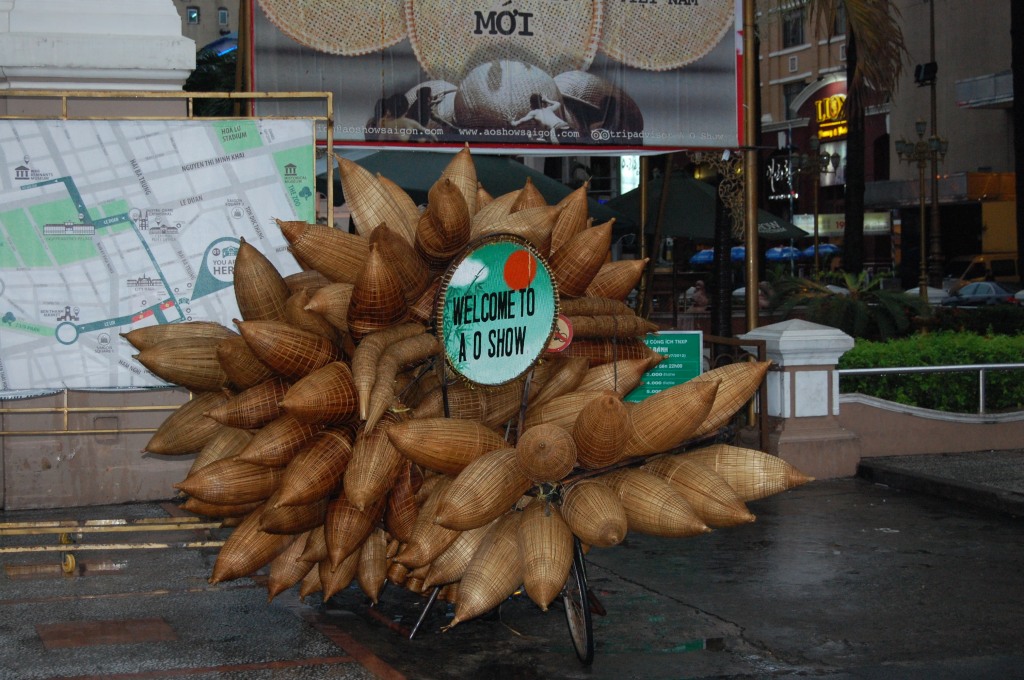 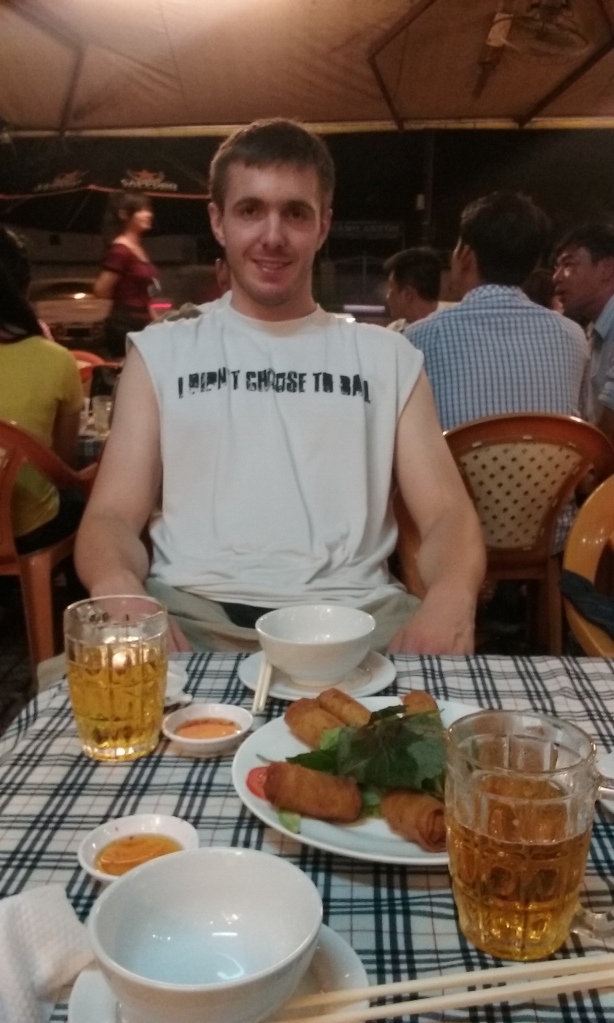 It was a really good deal, so we went out in high spirits to have some spring rolls and beer. We went to a restaurant full of local people, as we expected it to be cheap and tasty. The food was OK but it was scarce, the soup was rather a very small starter and the rolls were very few. Unfortunately the price was also high: we paid way over 200,000 VND, probably the prices were doubled just in the English menu. On the day when we came back from Mekong we discovered a cool street food stall just around the corner, where we paid only 60,000 VND for steakes with rice, salad, soup and green tea for two persons. All in all, Saigon was fun but if you go directly to Mui Ne or the Mekong Delta I think you will do better. 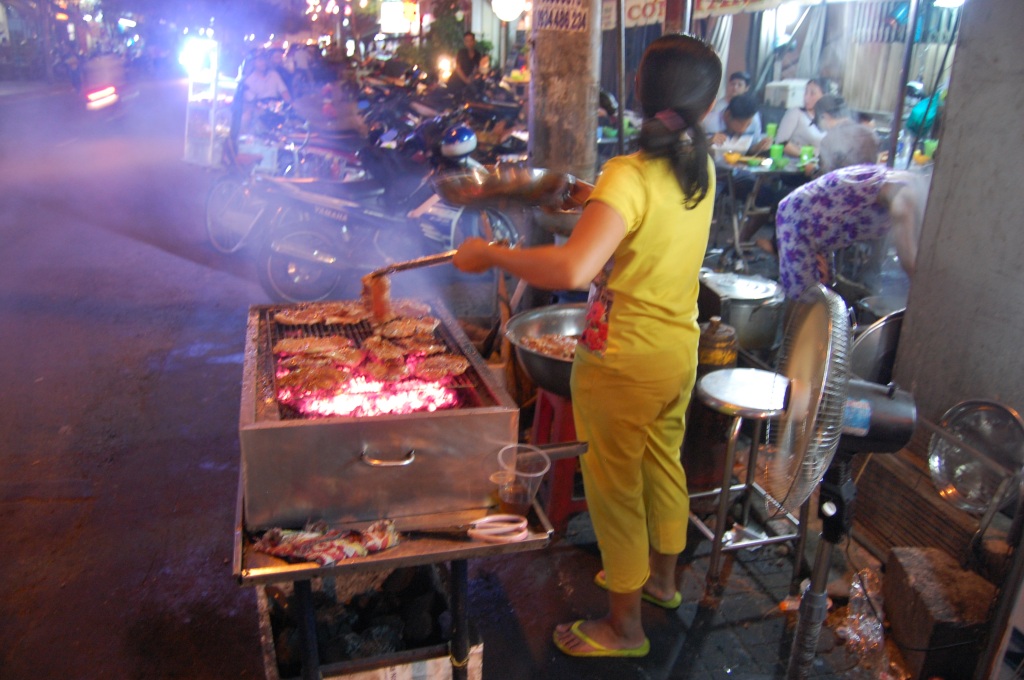